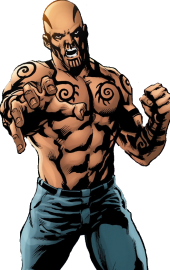 Everyone feels guilty about something. For some, that guilt becomes a burden and a gnawing presence—one that can rip a person in two and drive them to seek vengeance. …

Everyone feels guilty about something. For some, that guilt becomes a burden and a gnawing presence—one that can rip a person in two and drive them to seek vengeance. That vengeance becomes their very existence, consuming them and motivating their every move. People like this have likely suffered unimaginable loss and they feel responsible. Or they may be suffering from the curse of El Diablo…

When gang leader Chato Santana was left severely wounded after being betrayed by his second-in-command, he found himself sharing a hospital room with the comatose gunslinger Lazarus Lane. The nearly dead Santana traveled to the spirit world, where Lane passed the El Diablo curse he had been suffering from on to him. It wasn’t a gift. The El Diablo curse is rooted in revenge and punishment. It drives the afflicted to seek right for any wrongs that have been done, regardless of the cost. It bestows its host with a variety of abilities, most notably pyrokinesis and extreme resistance to injury, as well as supernatural skills such as seeing a person’s sins written on their soul and communicating with spirits in the great beyond.

Chato used his newfound pyrokinesis when going after a rival gang. He set the gang’s home ablaze and accidentally killed an innocent woman and children in the process. Remorseful over his crime, Chato didn’t resist arrest and found himself calling Belle Reve Penitentiary home. Proving his loyalty under extreme duress, he was soon inducted into the Suicide Squad. Though his repentant attitude often runs counter to the devil-may-care approach of his teammates, Chato’s abilities as El Diablo have helped the Squad’s success rate tremendously.