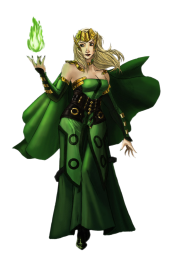 The Enchantress possesses the conventional attributes of an Asgardian woman ("goddess"), as well as a mastery over certain sorcerous disciplines: Superhuman Strength: …

The Enchantress possesses the conventional attributes of an Asgardian woman ("goddess"), as well as a mastery over certain sorcerous disciplines:

Superhuman Strength: Amora is superhumanly strong, possessing physical strength roughly average for an Asgardian woman. At her peak, she is able to lift about 25 tons.
Superhuman Speed: Amora can run and move at speeds that are beyond the natural physical limits of the finest human athlete.
Superhuman Stamina: Amora's Asgardian musculature is considerably more efficient than that of a human being. Her muscles produce considerably less fatigue toxins during physical activity than human muscles. At her peak, she can exert herself physically for about 24 hours before the build up of fatigue toxins in her blood begins to impair her.
Superhumanly Dense Tissue: Amora's bodily tissues, like those of all Asgardians, possesses roughly three times the density of human bodily tissues. This contributes somewhat to her superhuman strength, her durability and her weight.
Superhuman Durability: Like all Asgardians, Amora's body is much more resistant to conventional physical injury than a human being. She can withstand great impacts, exposure to temperature extremes, and powerful energy blasts that would severely injure or kill a human being with no injury to herself...