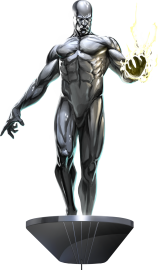 When Zenn-La was threatened by the world-devouring entity known as Galactus, Norrin Radd stood up for his home planet and offered to work for Galactus, finding him new …

When Zenn-La was threatened by the world-devouring entity known as Galactus, Norrin Radd stood up for his home planet and offered to work for Galactus, finding him new planets to eat, in exchange for saving his own. Years later, the Surfer has protected Earth and many other planets, becoming one of the greatest heroes in the universe.

The Silver Surfer wields "the power cosmic", absorbing and manipulating the universe's ambient cosmic energies. He can augment his strength to incalculable levels, and is almost totally indestructible. He can navigate space, hyperspace and dimensional barriers, and can fly at near-limitless speeds on his board, entering hyperspace when he exceeds light speed. He has even proven capable of time travel on occasion. The Surfer does not require food, drink, air or sleep, sustained entirely by converting matter into energy. He is immune to temperature extremes and most radiation, and can survive in vacuum environments such as outer space and hyperspace. He can analyze and manipulate matter and energy, and restructure or animate matter at will, even transmuting elements. He can heal living beings (though he cannot raise the dead), and has proven capable of revitalizing or evolving organic life on a planet wide scale. He can alter the size of himself or of other matter, cast illusions, fire energy blasts, form and manipulate energy constructs, manipulate gravity, absorb and discharge most forms of energy, and phase through solid matter. His senses enable him to detect objects and energies light years away, and to perceive matter and energy in subatomic detail; he can even see through time, and with concentration can achieve limited perception of past and future events in his general vicinity. The Surfer has demonstrated limited telepathic ability on occasion, and has proven able to influence human emotion and sensation.