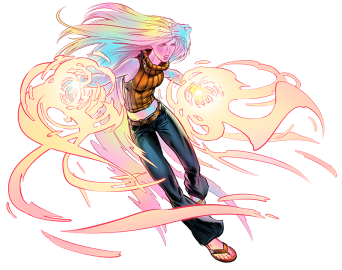 She can fly, project energy blasts, and create force-fields. Her blood is deadly to vampires, and her physiology presumably differs from humans in other ways as well. She …

She can fly, project energy blasts, and create force-fields. Her blood is deadly to vampires, and her physiology presumably differs from humans in other ways as well. She is empowered by solar energy and is thus less powerful at night. She appears to be manic-depressive.

Solar Energy Manipulation: She is able to absorb solar radiation and convert it into a unique energy type which she can manipulate for various uses. Karolina's powers are stronger related to her exposure to sunlight. It is possible this is absorption of some sort of cosmic energy. She is able to store the solar energy in every cell of her body, even her blood.

Bio-luminescent: In her natural state, Karolina's skin and hair are luminescent with a shimmering, rainbow-colored light of solar radiation. Originally, Karolina was unable to control this vibrant appearance, and required her medical alert bracelet to suppress this ability. With practice, Karolina was able to appear human without her bracelet.

Light Energy Blasts: Karolina can also project the solar energy in a beam of variable intensity and diameter, from a wide concussive blast to a thin laser-like cutting beam.

Force Fields: She can control the projected energy to a limited degree forming defensive/protective shields/barriers or to create restraints.

Flight: Karolina is able to propel herself into the air leaving a rainbow-like trail behind. The upper limits of her speed have yet to be determined. She is also able to carry others while flying.

Enhanced Strength: Karolina also appears to be stronger than an average human.