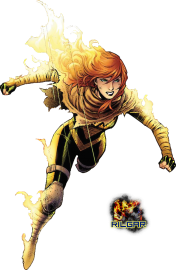 Hope was a mutant that to possess great powers, although they had yet to be shown. At this point, Hope's powers have not been explained. The only notable thing is that …

Hope was a mutant that to possess great powers, although they had yet to be shown. At this point, Hope's powers have not been explained.

The only notable thing is that when she was born, she unleashed a massive psionic pulse that destroyed Cerebro. She also proved to be immune to Rogue's newly lethal absorption power and her touch erased all of the previous memories and abilities Rogue had absorbed, including those of the Hecatomb. She also cured Rogue of the Strain 88 virus. During Messiah Complex when the Three-in-One tried to search for her when she was kidnapped by the Marauders, she was able to block and disrupt Cerebro from finding her.In Messiah War, after mentally scanning her, Stryfe hints that she has the same powers he does (telekinesis and telepathy), and is potentially far more powerful than he is.Hope has finally shown some glimpse of the telekinetic powers at her command by stopping a bullet fired at her by Bishop and generating extremely powerful energy blasts that overloaded his own natural ability to absorb projected energy. She could also sense Bishop suggesting some form of telepathy. However, although Duane Swierczynski has hinted that these powers could be something else entirely, he also says that he has a thing for women with red hair and green eyes who can move objects with their mind.Hope may also have some link to the Phoenix Force, as evident when the Phoenix Raptor manifested in her eyes, although this has not been explained.