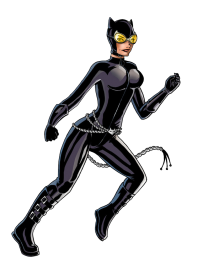 She's made countless comic book appearances since her debut in 1940's BATMAN #1. She's been portrayed by two Oscar-nominated actresses—Michelle Pfeiffer in Tim Burton's …

The Dark Knight’s greatest love/hate relationship began on April 4, 1940.Indeed, Selina Kyle has led many lives as the feline fatale Catwoman—but one thing remains the same: Whenever this cat crosses your path, she's equally likely to steal your heart as well as your wallet.

Growing up an orphan in one of Gotham’s worst neighborhoods, Selina turned to a life of crime to not only keep herself alive but her friends as well. The vivacious villainess elevated cat burglary to an art form, stealing whatever may be necessary—and sometimes even more—to survive and protect those closest to her. Utilizing a cat mask and suit to steal from the city’s rich and corrupt, she's a master at hand-to-hand combat and acrobatics, stealthy as a ninja and an expert at breaking and entering.

However, despite her burglarious nature and antagonistic origins, Catwoman walks a fine line between hero and villain. She balances precariously on the precipice of good and evil, of doing the wrong thing for the arguably right reasons. And as such, Selina doesn't look at the world in black and white, but shades of gray. Guided by her own strict—if not slightly skewed—moral compass, Selina sometimes serves as one of the Dark Knight's closest allies. Their flirtatious relationship and complicated feelings for one another constantly push both in directions neither thought possible...or are always comfortable with. Particularly since there always looms the possibility that one day Catwoman will take her crimes too far, and Batman will have no choice but to see her behind bars.