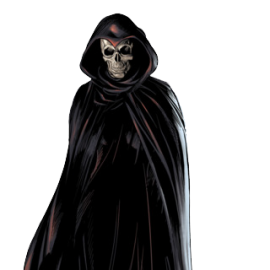 Death: Death itself can liberate the soul or spirit of a living being but generally leaves this task to the various beings of the afterlife, such as theValkyries, Hela, …

Death: Death itself can liberate the soul or spirit of a living being but generally leaves this task to the various beings of the afterlife, such as theValkyries, Hela, or Doorman. Because Death is the embodiment of all death, every lost soul belongs to it, so the agent of passage is irrelevant. Death can also reverse that passage and return a being to life, but that rarely happens. Death can choose to ignore certain beings, possibly as a mark of respect for their ability to survive. The Elders of the Universe fall into this category. Other beings with the proper knowledge, such as the Sorcerer Supreme, can challenge Death directly; by succeeding at this challenge, they become immune to true death.

Amortality: Death itself cannot die, since it is not truly alive; the basic laws of the universe would have to change to erase death.

Power Cosmic: (Nigh-Omnipotence if not Omnipotence) Unlimited ability to manipulate reality, time, space, matter, energy, or magic for any purpose. It rarely uses this power, however, possibly because it does not wish to upset the balance of the cosmic entities, which could endanger itself.

Soothing Appearance: If Death manifests itself to a mortal being in its final moments, it may take the form of a loved one. When Captain Marvel died, for instance, it manifested itself as Una, his greatest love.