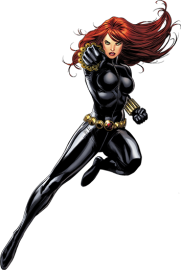 Artificially Extended Life: Natasha has received a Russian serum that extends her life and youth, resulting in her maintaining the appearance of a woman in her 30's …

Artificially Extended Life: Natasha has received a Russian serum that extends her life and youth, resulting in her maintaining the appearance of a woman in her 30's despite being born in 1928. She is classified as a Human. Nick Fury's intel classified her as power level 7.

Peak Human Strength: Her physical strength is at the peak level of natural physical limits of a woman of her height, weight and build. She is capable of lifting up to 500 lbs. However, she stated that the Punisher was stronger than her.

Peak Human Speed: Her speed is also enhanced to the peak of human capability. Natasha is as fast as a human can be.

Peak Human Agility: Natasha's natural agility is at the level of an Olympic gold medalist. She can easily coordinate her body with balance, flexibility, and dexterity.

Peak Human Reflexes: Her reflexes are at the peak of human ability.

Peak Human Senses: Her five senses are enhanced and function at the peak of human perfection.

Peak Mental Resistance: Natasha is extraordinarily capable at withstanding torture. She is often required to go undercover for S.H.I.E.L.D. and has been extensively trained to endure long-term inhumane interrogation methods.

Peak Human Immune System: While she is susceptible to disease, the Black Widow has been enhanced by biotechnology that makes her body resistant to aging and disease and heals at an above human rate.