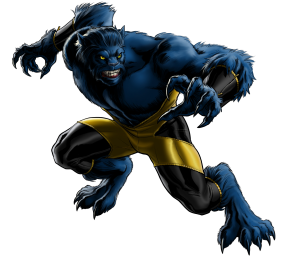 Genetic Atavism: It is possible that Beast's mutation is a result of genetic atavism (or genetic traits that resurface in a species after many years of dormancy). He also …

Genetic Atavism: It is possible that Beast's mutation is a result of genetic atavism (or genetic traits that resurface in a species after many years of dormancy). He also possesses neotenous (or traits in a descendant that resemble those of an ancestor organism) characteristics, which would explain why he has a big modern brain with an ape-like physique.

Due to Secondary Mutation, Beast transformed from his original ape-like physique to a more cat-like physique. A next mutation affected him, and he required the help of his past self, who was able to stabilize him in a new appearance.

His powers have varied at times due to ongoing and subsequent mutations.

Superhuman Strength: Beast has always possessed some degree of super human strength, as during his teens, he was able to lift approximately 1 ton. After mutating into his simian form, and after this mutation eventually stabilized, his strength was increased to the point where he can now lift about 10 tons, which was sufficient to smash through a brick wall with a single punch and to tie an iron barbell into a knot, as well as smash a tank with his bare hands. He can even punch the ground with enough force to create a massive shock wave. This strength also extends to the muscles in his legs, allowing him to leap 15 feet in a standing high jump and 25 feet in a standing broad jump.

Superhuman Speed: Beast can run and move at speeds that are slightly beyond the natural physical limits of the finest human athlete, despite his abnormal size. He can run at speeds up to 40 miles an hour over short distances, particularly if he runs on all fours. It also allows Beast to attack opponents before they can react and pull their trigger fingers and keep up with opponents who can move at low-level superhuman speeds.

Superhuman Stamina: Beast's highly advanced musculature produces less fatigue toxins during physical activity than that of an ordinary human. He can exert himself at peak capacity for several hours before the buildup of fatigue toxins in his blood begins to impair him. He also commented that after his mutation into a cat-like form that he no longer needs a full night of sleep, although it is unknown if he still retains this side effect of his stamina after becoming a new ape-like form once again.

Superhuman Durability: Beast's bodily tissues are harder and more resistant to certain types of injuries than the bodies of normal humans. His physiology can withstand great impact forces, though he can be injured by many types of conventional weapons such as standard firearms and bladed weapons. However, he can withstand physical impacts, such as falling from several stories or being physically struck by many superhumanly strong beings that would either severely injure or kill a normal human with little to no discomfort.

Superhuman Agility: Beast's agility, balance, and bodily coordination are enhanced to levels that are beyond the natural physical limits of the finest human athlete. While in his simian form, he has the agility of a great ape combined with the acrobatic prowess of an Olympic level gymnast. He can walk a tightrope or a slack rope as easily as most people can walk on a sidewalk. He can also walk on his hands for many hours, or perform a complicated sequence of gymnastic stunts such as flips, rolls, and springs. He can easily match or top any Olympic record in gymnastics.

Superhuman Reflexes: Beast's reflexes are similarly enhanced and are on levels beyond the natural physical limits of the finest human athlete. His training with the X-Men, as well as his experience battling enemies has granted him the reaction time to evade gunfire. He can react at low-level superhuman speeds. His reflexes are a partial reason why the Beast is able to be so agile and fast, despite the abnormal bulk of his ape-like form. 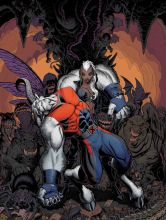